Not everything is as it appears to be in the sparsely populated town of Nirvana.

Three years earlier, a bus full of middle grade school children went missing and none of the victims’ parents have ever seen or heard from their beloved child again. Rachelle Wigby has just had her second nervous breakdown due to the unknown whereabouts of her precious daughter, Priscilla. Dr. Barns, Rachelle’s estranged brother, feels it’s time someone got to the bottom of what happened to his niece.

Dr. Mira Cullen is made aware of the plight of her boss’s family and feels compelled to help in any way she can. After embarking upon the investigation using nothing but the unusual gifts she’d been born with, will she bring satisfactory closure to the puzzling mystery or will she discover something involving the missing children that is most unfathomable and disturbing?

CLICK HERE TO RESERVE YOUR COPY TODAY AT THIS SPECIAL PRE-ORDER PRICE.

Corruption, Scandals, Kickbacks- All Make For Good Politics and… MURDER.

“Gripping, fast-paced. The Suspense is a Killer!”

away to impart his specialized training and modernized investigative techniques to the police force in a small Caribbean nation off the Florida Coast. He doesn’t imagine he’d find himself entangled in political rifts that will ultimately result in a prominent politician losing his life. Myers’ expertise as a top detective will be put to the test as he sets out to solve the mystery behind who would want Jackson Cunningham dead — a man he’d met and admired. What he discovers in the end will come as a complete surprise — not only to the citizens of that developing nation, but also to him as a seasoned investigator.

Shadows and Spellcraft has your copy of Expelled Reaper by Robyn Jenkins plus over a dozen more reads at the amazing pre-order price of $.99! Order your copy today! 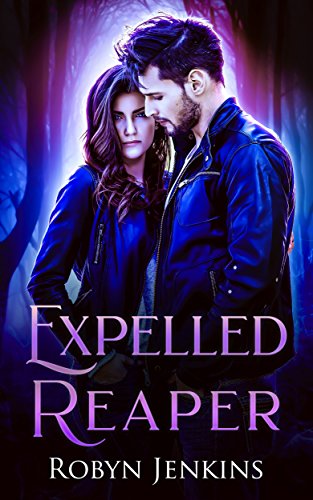 Lara is a reaper, locked out of Heaven, and the worst part is she doesn’t even know why. She’s not even sure if she’s still an angel anymore. On the bright side, she can still see the dead which makes her think that she hasn’t been fired. However, with each passing year, she realizes she’s been naive to think Heaven would make a mistake of this magnitude.

Lara finally starts thinking about accepting her situation and making plans for the long term. Then she witnesses a young woman die in a car accident. It’s one thing to arrive after the fact to retrieve a soul, it’s another to actually see someone killed in person. Since Lara is the only one who can see the dead, she feels compelled to console the woman. But something is wrong. Since when are reapers late to pick up souls?

Convinced that her eternal soul may be at stake, Lara is pulled back into the life. She’s died once already. Now, flesh and blood, she’s worried about what will become of her if this new vessel is mortally wounded. Will she gain access to Heaven again, or will she plummet into a fiery Hell?

Robyn is the author of Expelled Reaper and the Into the Ether trilogy. She enjoys writing when she’s not at her day job, Zumba to release, and when all else fails, a glass of pinot and a good suspense novel at the beach

A boxed set with over a dozen amazing reads, that will take you to lost worlds, fall in love with unlikely heroes, and kick some butt with no-nonsense chicks. With a collection that includes New Adult romance, urban fantasy, and Young Adult, there’s something for everyone.

Each story is exclusive to this collection, and includes some shiny new stories from USA Today and New York Times bestselling authors.

If you love to binge on stories that take you away from the ordinary, this boxed set of fifteen books will keep you reading for days. It’s stuffed with vampires, shifters, mages, fae, ghosts and more in everything from modern day Earth to Apocalyptic settings. Bury your nose in this box set now. Order your copy of SHADOWS AND SPELLCRAFT NOW

“A gritty, bone-deep story of a tortured and traumatized little girl, rising from the ashes like a phoenix to become a healthy and healed woman, who is a force to be reckoned with. This tale will break your heart, dragging you through the ugly world of abject abuse, and just when you think you can’t bear another page, it’ll flood your senses with hope, truth and love. Grab your tissue box and a glass of wine – you’re going to need it for this grim, but inspiring, journey of triumph.”
– Summer Prescott, Publisher and Bestselling author of The INNcredibly Sweet Series

At the age of eight, a few days after her maternal grandmother’s passing, her mother struck her face continually shouting she wished she had never been born. A short year later, at the tender age of nine, her uncle, a police officer, began sexually abusing her. It was this monstrous battering and lethal asphyxiation of her soul that caused something powerful to rise up within her and cry out for justice – the kind of justice that only comes from a life well lived.

Though the road was more than rocky, and filled with dangerous pitfalls in childhood and well beyond, Diane Morasco wouldn’t change the expressway through hell that she was destined to travel to get to where she is today. The accomplished and secure businesswoman was blessed with having three “earth angels” who set her on her journey of healing and redemption. The first angel saved her life, the second angel breathed life into her and the third angel showed her just how precious her life is.

ON SALE TODAY AT AMAZON!

I am truly honored to have been asked to reveal the cover for the upcoming heart-stirring, poignant book by Diane Morasco of Morasco Media: Even Tough Women Can Crack Like Eggs Sometimes.

Diane Morasco shares her knowledge, insights and journey in Even Tough Women Can Crack Like Eggs Sometimes.

Diane Morasco wasn’t born with the last name Morasco. However, it is who she evolved into as a result of the chaos surrounding her childhood.

At the age of eight, a few days after her maternal grandmother’s passing, her mother struck her face continually shouting she wished she had never been born. Her mom was enraged for being saddled with a child she had never wanted. A child her mother wanted her to have. A child born into a German-Irish family as a result of a rape by an African-American-Hispanic man – which may or may not be the full story. A child whose grandmother shielded her from as much of the bedlam as she could in the eight years she had with her precious granddaughter.

At the age of nine her uncle, a police officer, started sexually abusing her. It was this monstrous battering and lethal asphyxiation of her soul that set in motion every decision she ever made.

Today, Diane Morasco wouldn’t change the expressway God, the Creator, the Source, the Universe and every angel in the realm wanted her to travel to get here.

She was blessed with having three earth angels set her on her journey. The first angel saved her life, the second angel breathed life into her and the third angel showed her how precious her life is.

Even Tough Women Can Crack Like Eggs Sometimes is how she endured the bushes, brambles, ebbs, flows, hills, and valleys to make it through to the other side.

It is natural, as human beings, to gravitate to outside foundations to validate our own beliefs, thoughts and understandings.

When we identify with others who have been through kindred experiences and have journeyed the same terrain, it empowers us to accept, embrace and realize that we can be restored to the greatness we hold inside.

When we witness other individuals conquer their devastations, heartache, grief, mayhem, and miraculously see them break out of their shell to soak up the sunlight and give heartfelt gratitude for the chaos which molded them into the miracles they are today, we can shout from the mountains, “Even Tough Women Can Crack Like Eggs Sometimes!”

In Even Tough Women Can Crack Like Eggs Sometimes, Diane Morasco shares how she conquered the challenges of:

And much, much more.

Even Tough Women Can Crack Like Eggs Sometimes will be released on November 22, 2016!